NO WALLS Oeiras - Inauguration of the Urban Art Route

Today, the Urban Art route of the NO WALLS Oeiras project was inaugurated. The Open Call gave the artist Alecrim the ninth work to be placed in the municipality.

NO WALLS Oeiras is an artistic intervention project in the public space curated by Lara Seixo Rodrigues, which arises from an invitation from the Municipality of Oeiras made to Mistaker Maker, in the context of the Mural 18 cultural platform in the Lisbon Metropolitan Area. At the moment when Oeiras is applying for the European Capital of Culture - OEIRAS 27, thinking and challenging visions for the public space through the arts is an interesting process to value.

Under the proposed theme of Freedom, recognized and emerging artists design a circuit with works in various locations in the Municipality, marking different axes of municipal action.

The choice of the name NO WALLS has multiple meanings, from the very beginning disruptive literality to leave the usual supports of urban art, by being the artists were asked to carry out the interventions in a structure, which for a on the other hand, it unifies all supports, it also challenges the artist to work from from a new perspective, questioning the field of action of his artistic practice and the agreed limits of Urban Art (or Urban Arts). In this way, using the concept of travel and map, challenges are posed for circulation and reading of the city's fabric, its material, immaterial and natural heritage, when disseminating artistic interventions in an exercise of action in the landscape.

Aiming at promoting artistic creation in public space and the emergence and / or recognition of the talent of this territory, the NO WALLS project promoted an OPENCALL for artists residing in the Metropolitan Area of Lisbon (Portuguese or foreign), which resulted in the 9th artist that integrated this circuit. 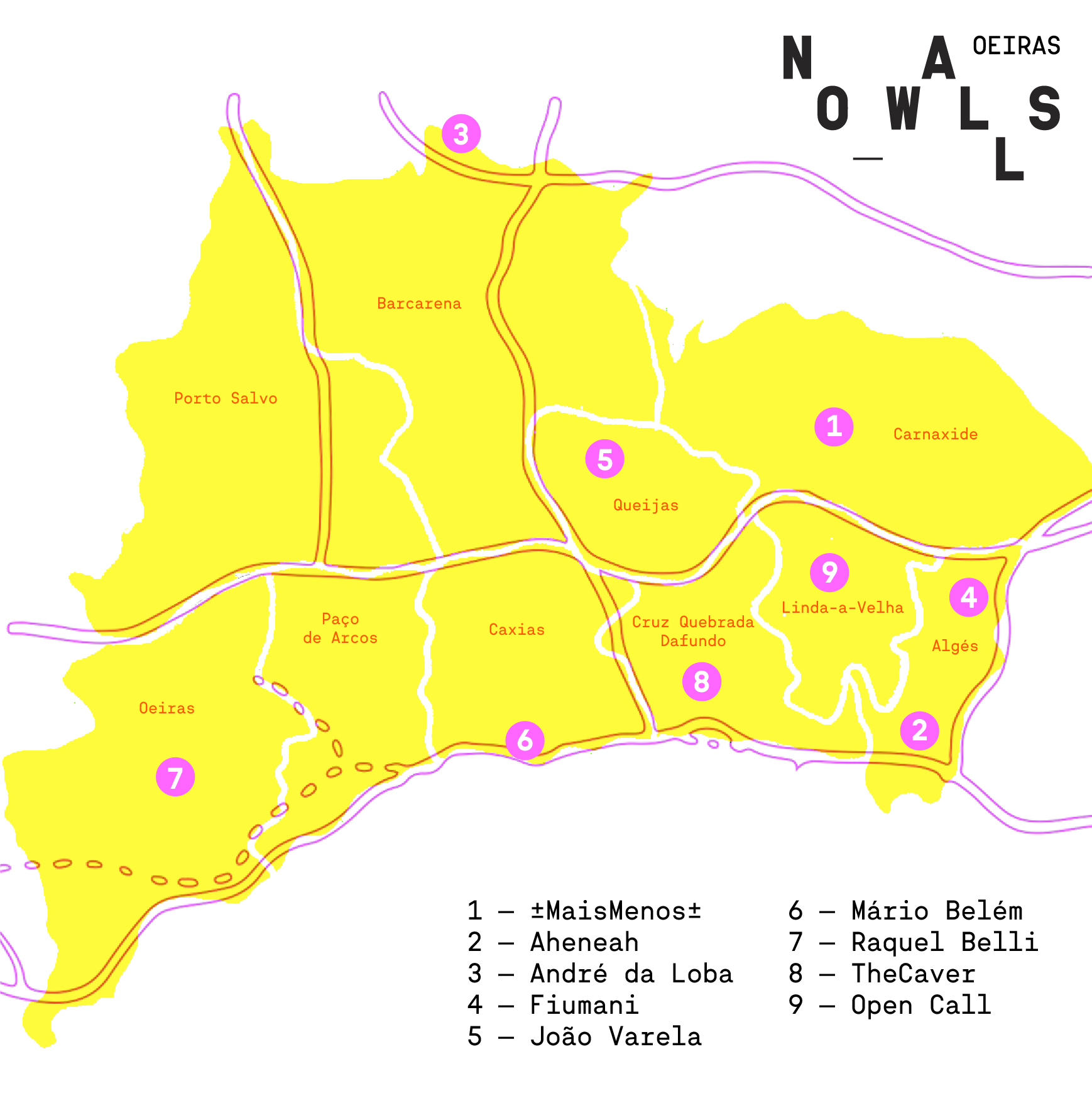 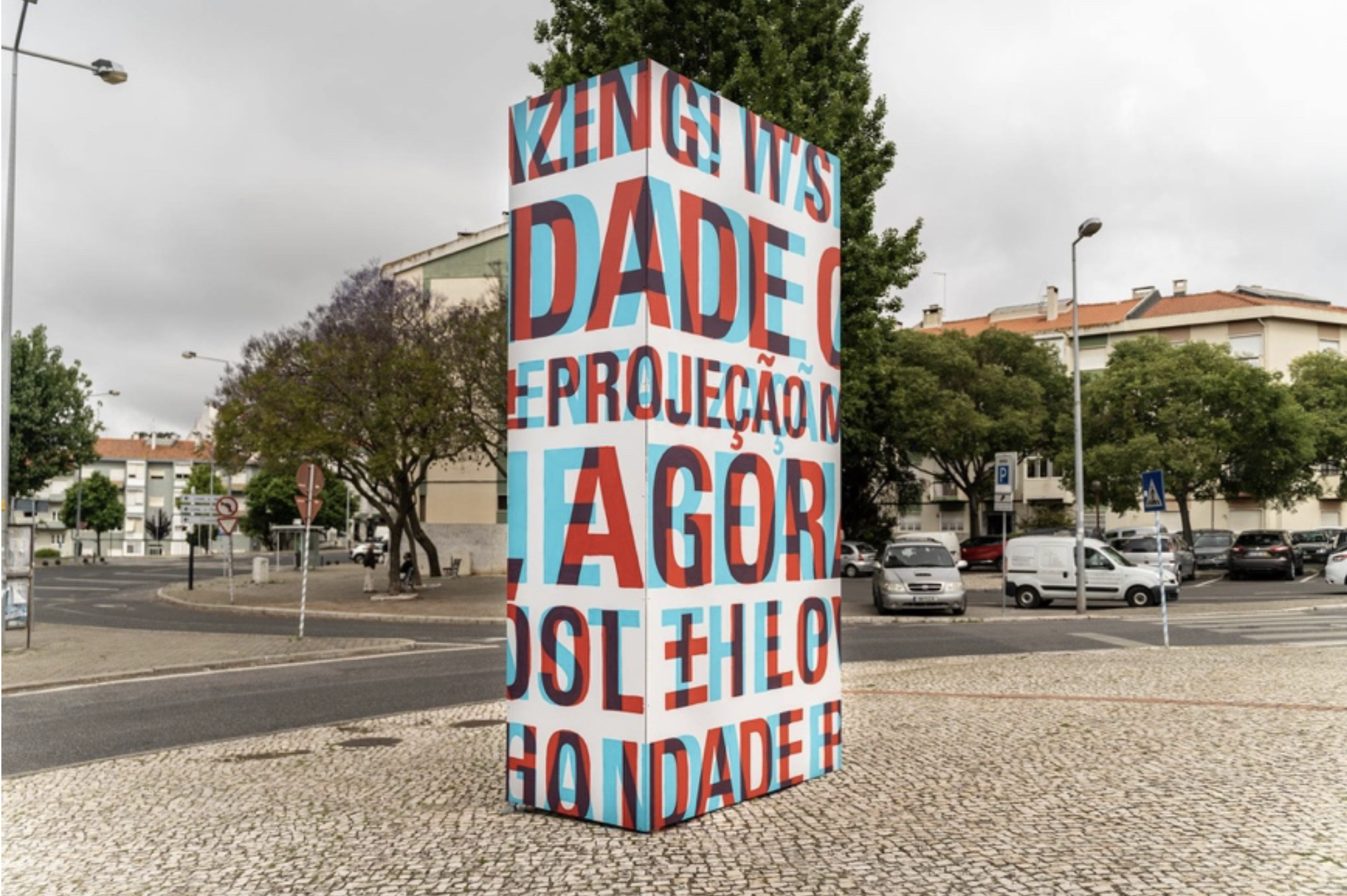 "Monumento à Street Art" [Monument to Street Art], it's a piece that addresses the theme of Freedom, allying it with Street Art, reflecting and inviting us to reflect on the paradoxes inherent to it. It tells us about the duality that exists between more illegal work, social and political intervention, versus more commercial work, which sometimes serves as a political instrument and decoration. In this monolith that is read as a monument, these 2 difficult-to-read realities intersect and a 3rd reading, virtual and augmented reality, is added, which you will only be able to discover with your mobile phone through the Artivive app! ​​​​​​​ 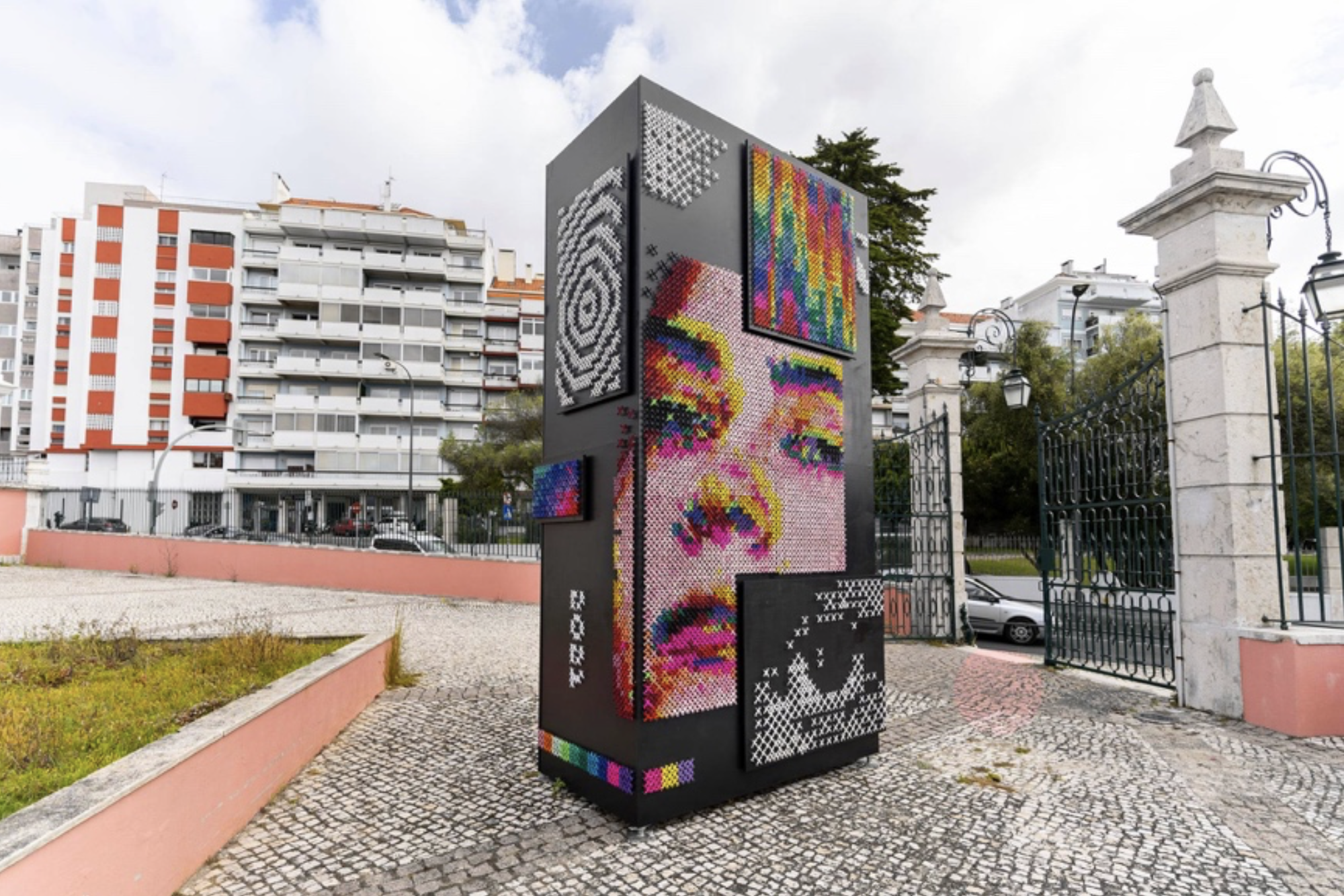 The starting point for the creation of the piece "Freedom" arose from the festival's own theme, Freedom, but specifically from the Flower Power movement, whose concept, humanism and incessant struggle for Freedom through Peace, inspire the artist in her daily life. We believe that in this way, the presence of the human figure, bright colors and vibrant patterns is understandable. However, there are other interpretations for this extraordinary piece, one that is quite technological, but it remains an invitation to discover it on the spot. ​​​​​​​ 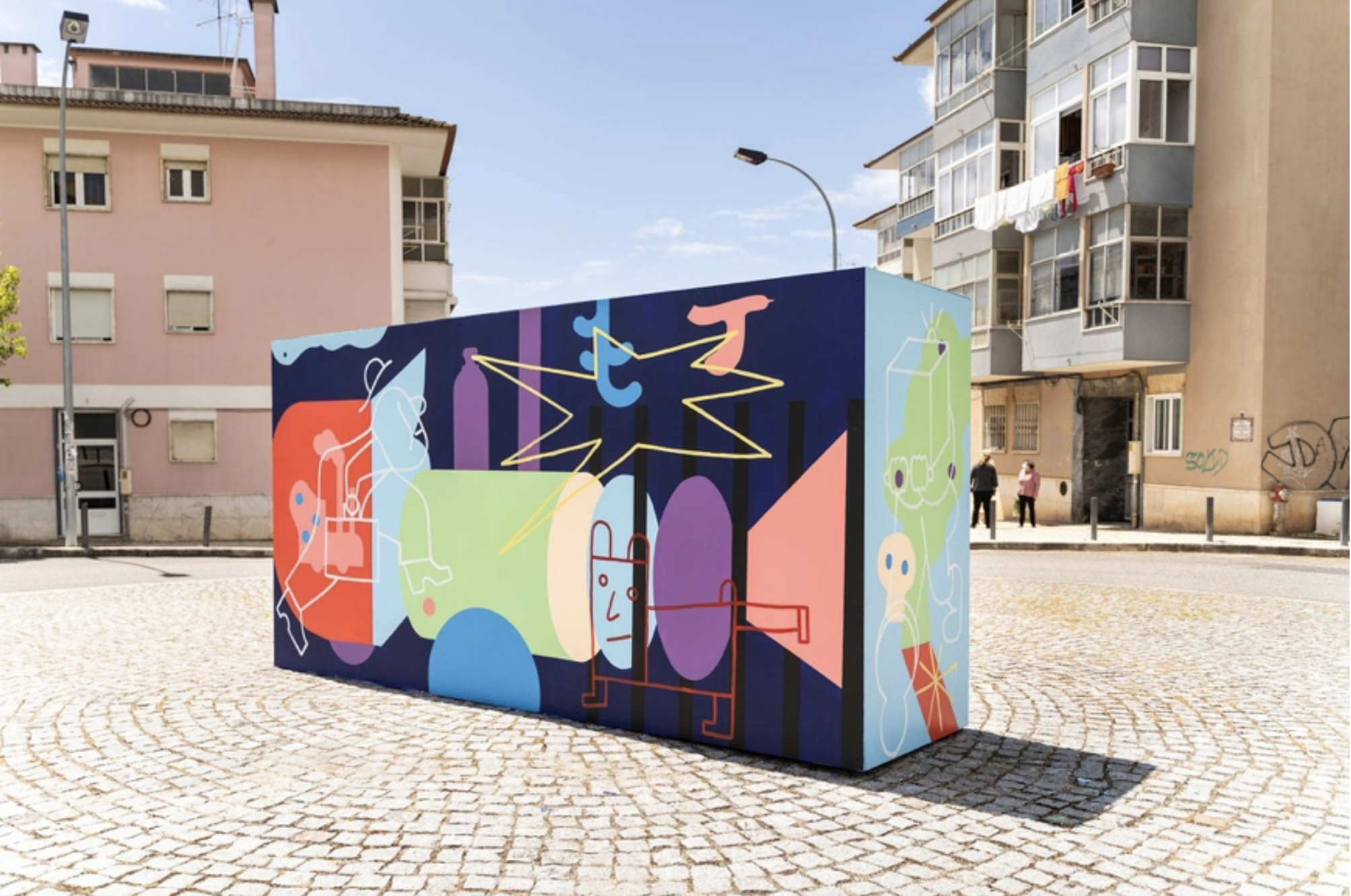 The proximity to the trains traced the inspiration of the artist André da Loba and under the theme of Freedom, he portrayed the experience of a train, the interior and exterior, promoting reflection on the positive impact that the existence of a train line naturally imposes on an entire region. It speaks to us of freedom of movement, of free access to goods and services, but also of exchange, encounters, (new) neighborhoods and the diversity that center and periphery gain in this mobility game. 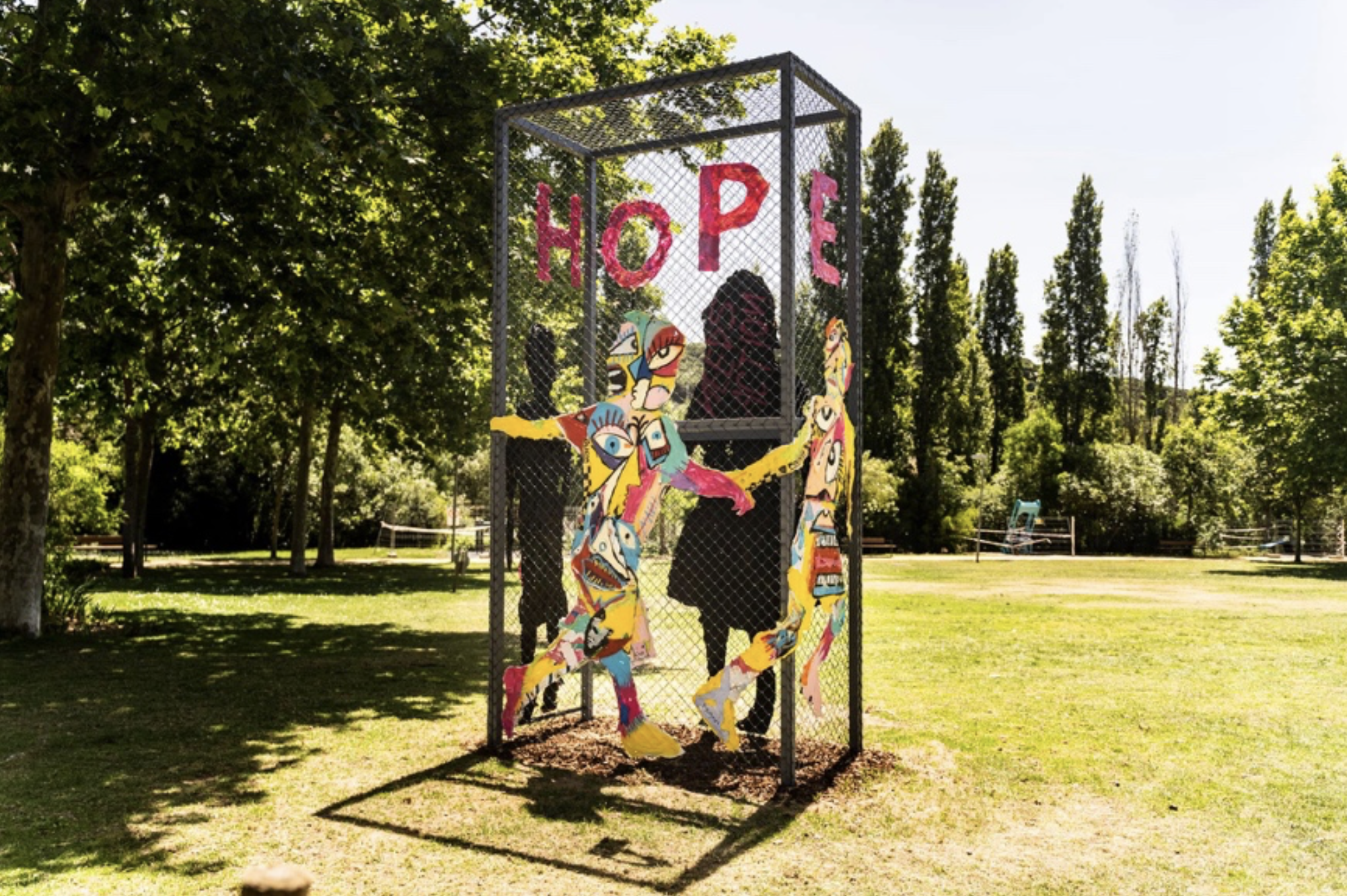 In addition to the strong manifesto that is the title of this piece, which needs little or no explanation, the piece contains several symbolisms: children, a symbol of hope and the future, recycled plastic represents the world, a world made of appearance , disposable, that wants to be transparent, dematerialized and of action, the same that is assumed to be necessary to read the word HOPE. 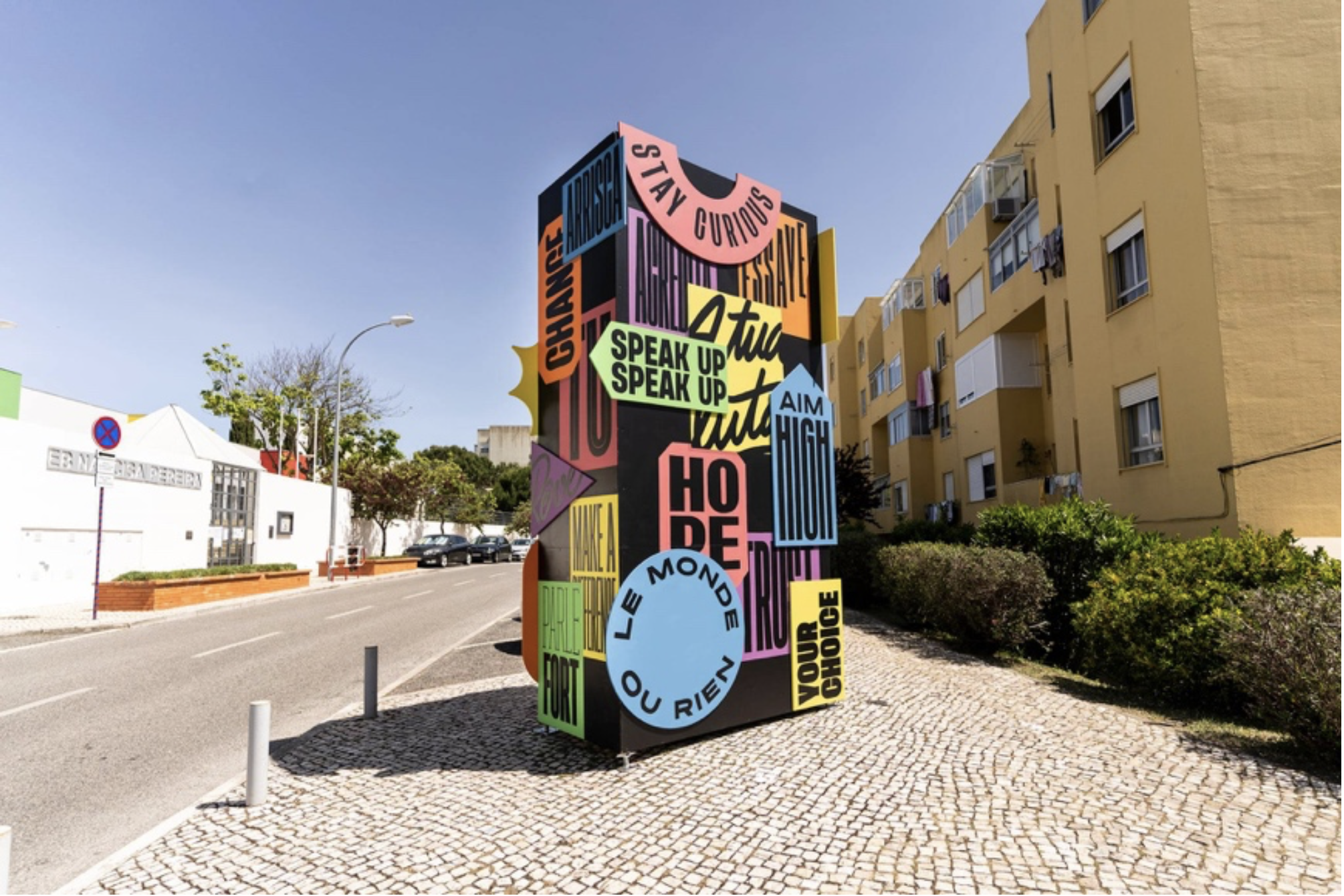 It is at the EB1 / JI Narcisa Pereira School that you can find this piece that brings together, in the artist's own words: "a set of signs about freedom and about education for freedom". An endless number of messages of positive values and actions is the testimony that João Varela leaves for all the children (and not only) who live in the neighborhood. 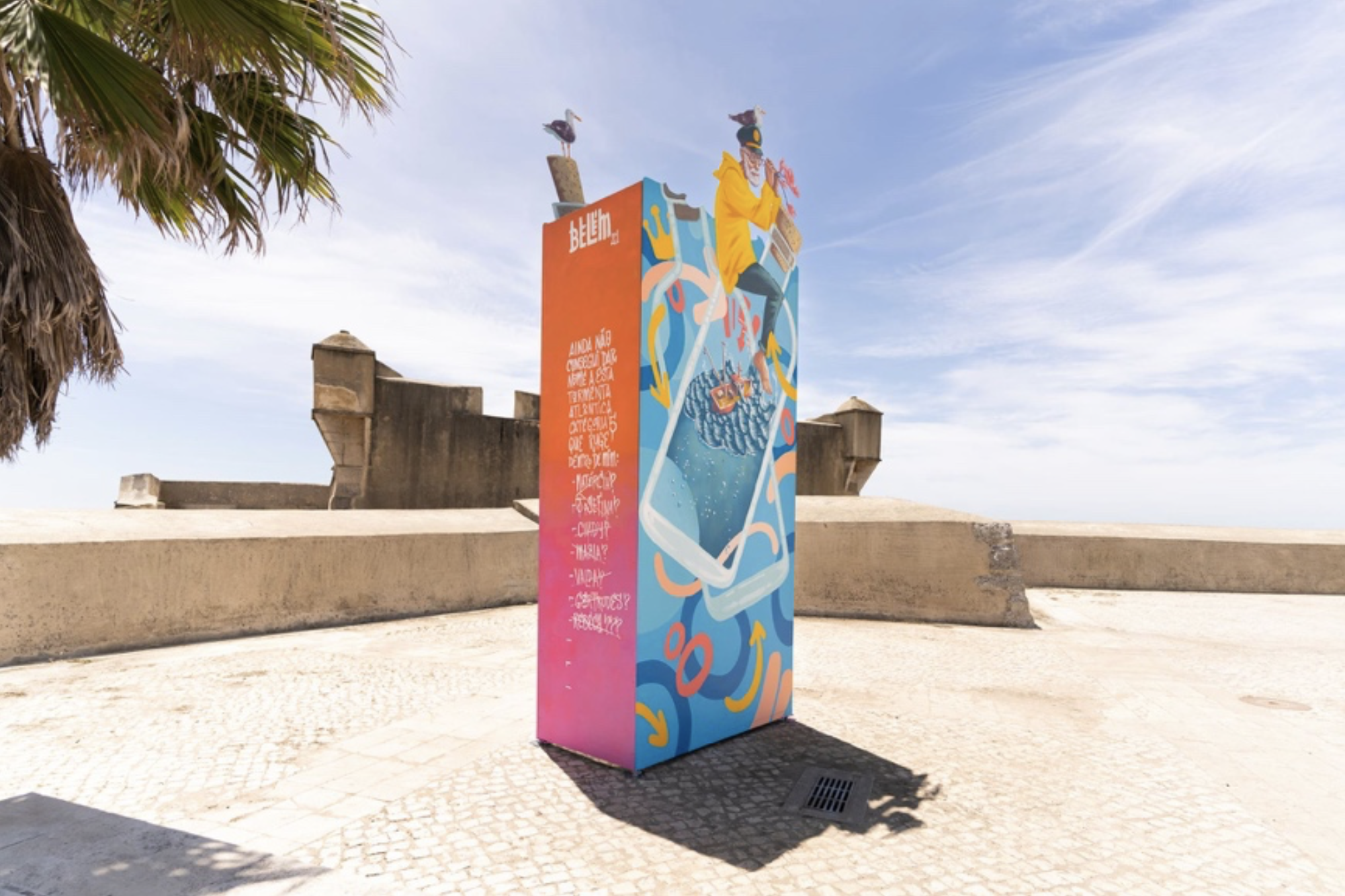 It is near the Forte de São Bruno, at the confluence of the Barcarena river and the Tagus Estuary that we can find "Um dia dos", the title of the piece by the artist Mário Belém. It was precisely this unique place that was the source of inspiration for this work that speaks to us of a very particular and simultaneously universal Freedom. On a visit to the site, they may find the phrase "I still hope that one of these days will run aground once and for all (and to finally be able to tell you all the things I saw along the way)", which tells us about the artist's relationship with the sea, like this one instills us with a feeling of immensity, peace and freedom, a sea in which we sometimes walk adrift and in constant search. 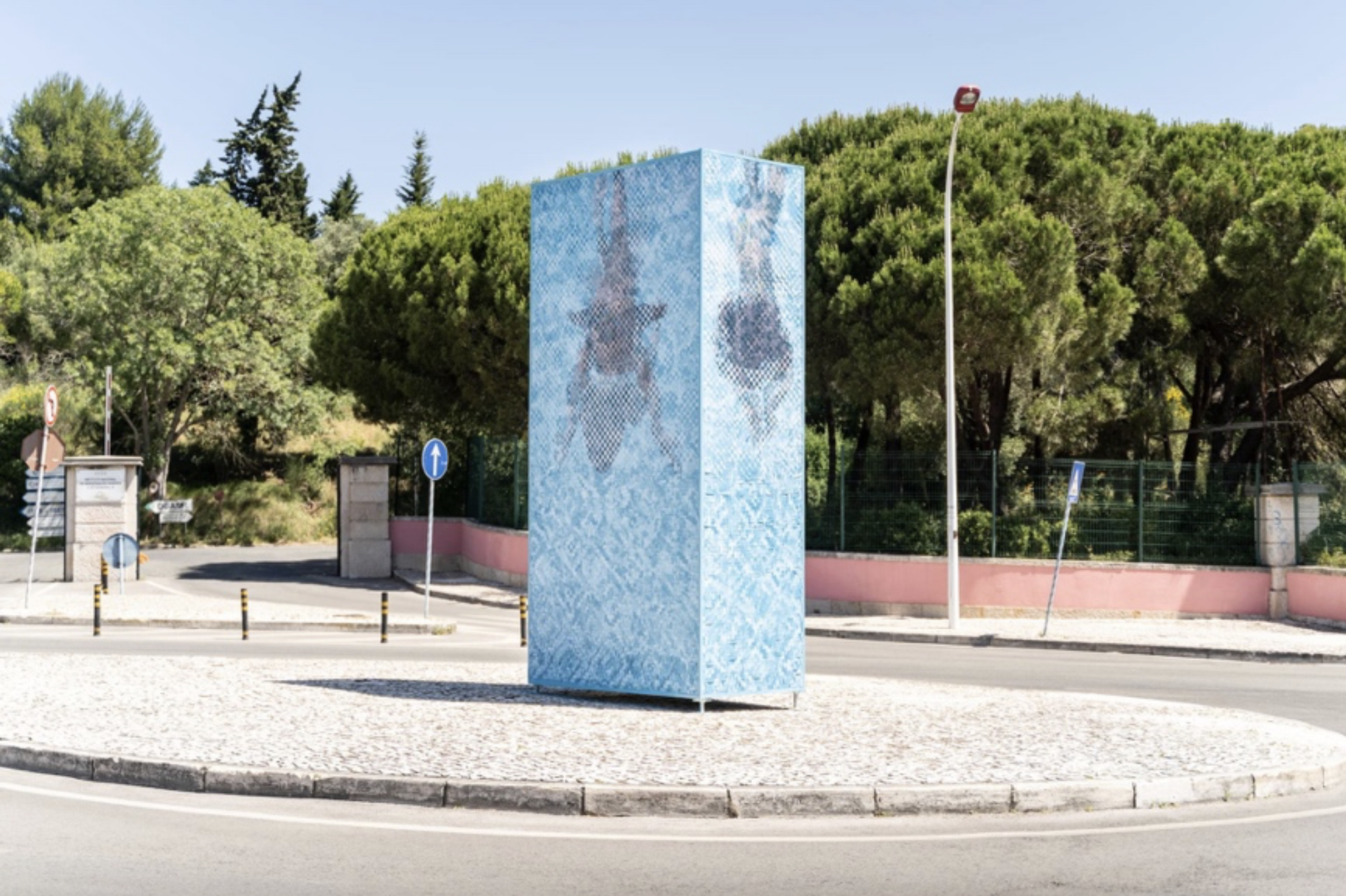 "Todos os Sonhos" [All of the Dreams] is the title of the piece that photographer and visual artist Raquel Belli developed for NO WALLS Oeiras and that they can already find in Oeiras, more precisely on Avenida da República. This piece is an allusion to freedom. To the expected freedom, to the future freedom, to the creative freedom, that freedom that is lived (only) in childhood, like that of a child diving, without worries, without weight of what is to come. 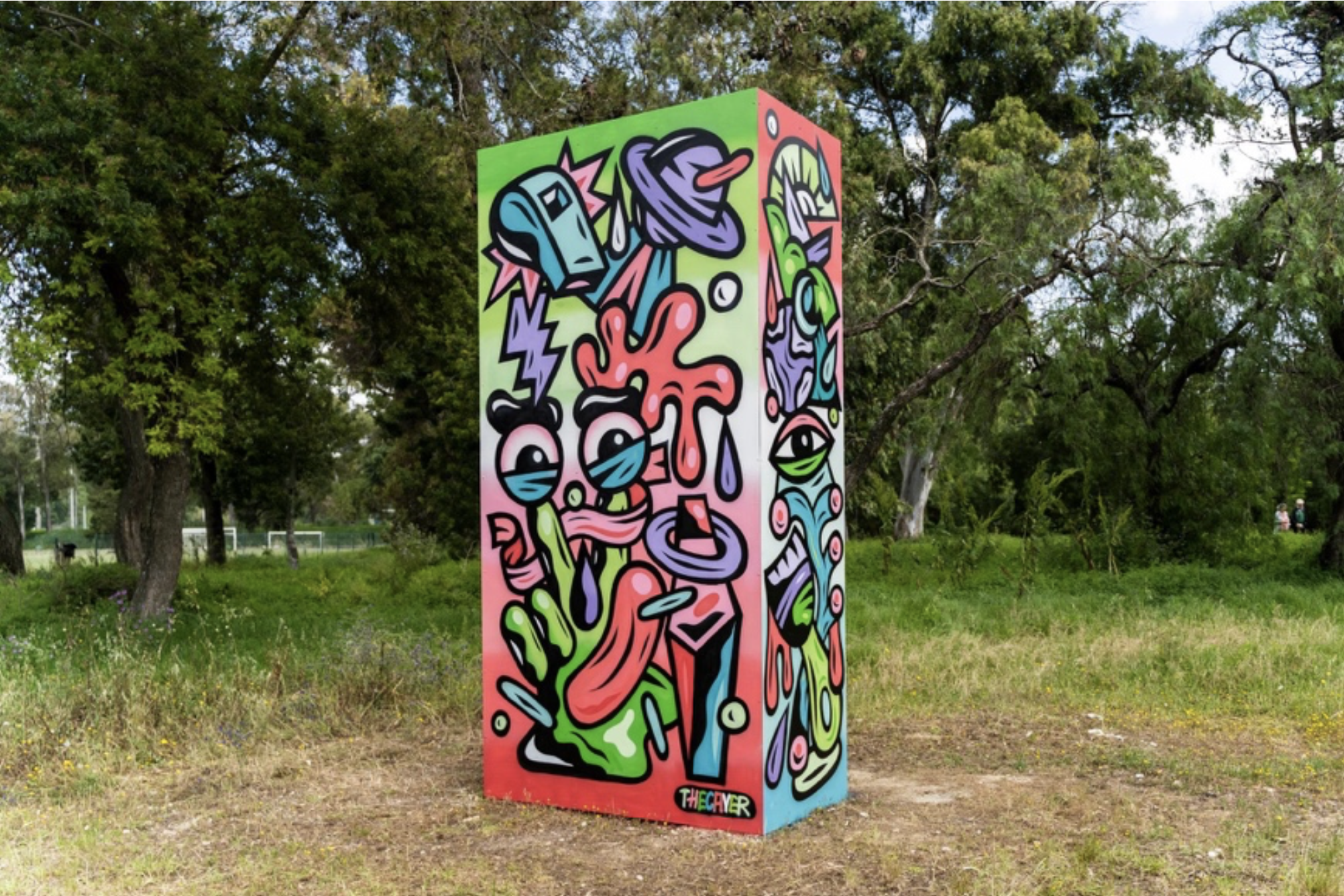 The artist THECAVER responded to the challenge of reflecting on the theme of Freedom, adding several dimensions and universes in one piece. Freedom, sport, nature and art, are represented through an intricate system of elements, which go back to the artist's imaginary world, aiming to convey a message of positivism, a message of inspiration and overcoming for the realization of our dreams. 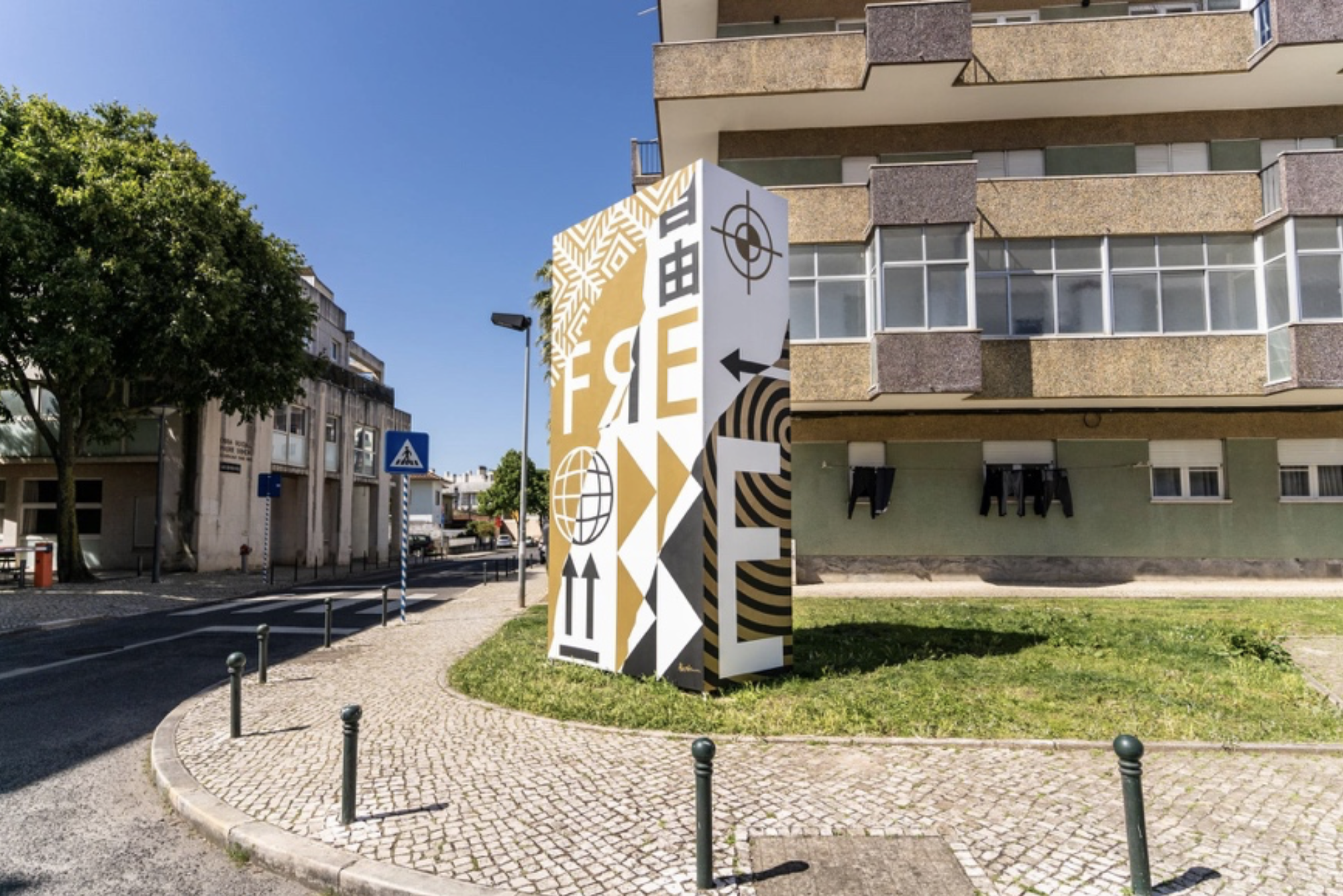 The artist Alecrim presented the proposal 'Liberdade é Ouro' which combines the artist's work, based on the pictographic language, combining symbols, textures and patterns with experimental compositions, with numerous graphic languages from different cultures, creating a universal language, such as the manifesto of the project itself. The word Freedom, written in different languages, decomposed, gained an ethnic, aesthetic and universal meaning, a symbolism of union between cultures, of breaking prejudices, of limitations and that opens the way for a global and free thought. ​​​​​​​